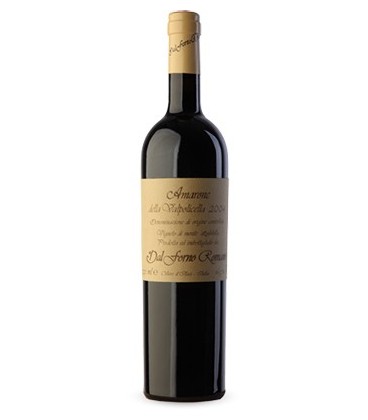 It is a wine with potential still unknown, but the depth of which bodes well for a long, long evolution ahead of him.

From September 20 to October 25, following the selection of the best grapes, on which we perform a thorough manual sorting in order to remove all the berries less valuable. The grapes thus collected is put in plastic trays and allowed to rest for three months in wide open venues, where an innovative ventilation system allows to maintain a very high air flow and capillary.

60% Corvina, 20% Rondinella, 10% Oseleta, 10% Croatina. The grapes for Amarone come exclusively from vineyards that have passed a minimum age of 10 years.

Average starts in mid-December after having played further manual selection of each cluster in order to remove all grains that have battered during the months of withering.

In stainless steel tanks at controlled temperature (about 28 degrees), equipped with a sophisticated computerized system that allows to perform the automatic punching for a period of about fifteen days, including maceration final two days.

After decanting, in mid-January, Amarone, who has with him still a residual sugar, is put in new oak barrels, where it takes a very slow fermentation activity that lasts for a further eighteen months. The total stop in barrels lasts 36 months, however.

Final stage of the production process, which takes place after finishing the assembly of various barrels and filtering the resulting mass. A further refinement of 24 months in bottle before then the marketing of the finished product.