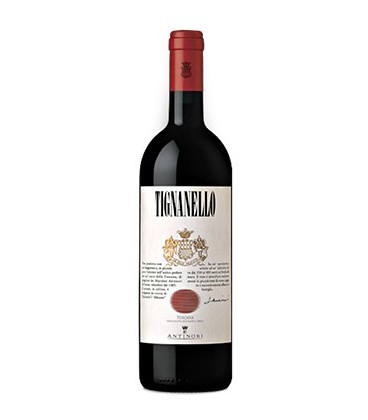 The autumn-winter was characterized by a rainy and cold weather pattern; in the last days of 2010, there were phenomena of snow, followed by days rigid. The first months of the year were to against dry and mild early spring, so as to ward off cold spells. The mild climate of the early days of April led to an early budding of the vines of about 10 days compared to the historical average. The growing season has been very favorable, with little rain and mild temperatures, to get to the month of July when the mild weather has allowed to realign the phenological phases of the screws. As of the first decade of August temperatures have risen to more than half in September, causing a small stop in the process of maturation. The grapes have benefited from the next climate change that occurred after September 20, when the temperature between day and night has allowed them to evolve optimally towards full maturity; collections of Sangiovese, the main varieties and dominant in the Tignanello vineyard, began September 27 and were completed in the first week of October. Cabernet Franc has had a very good development, the grapes ripened regularly and were taken to the cellar between 20 and September 26. The vintages of Cabernet Sauvignon instead focused in the first ten days of October, starting with the earliest land and ending in areas of higher altitude, gained more regularly.

The hot and dry season has imposed a strict selection in all the highlights of the harvest period; the collection in the vineyard was in fact essential to select the clusters, paying particular attention to the exposure and the integrity of the berries. The harvest, conducted exclusively by hand, took into account the variety, but also exposure and different altitude of various parcels of vineyard Tignanello; In fact, these were collected one o'clock separated from the other, so you can conduct the fermentation at the specific and different expressions linked to the terroir. The grapes were de-stemmed and then bring on the tables of manual selection; Hence the attention to detail is maximum, the goal is to remove that small percentage of grapes dried or slightly surmaturi, so as to lead to the tank winemaking only those perfectly intact. During fermentation and maceration, in conical tanks, the must have turned slowly into wine, with extreme attention to the freshness of the scents, the extraction of color, tannin management once the sweetness and elegance. Once you separate the skins and wine, has initiated the malolactic fermentation which, in barrels, enhances the finesse and the pleasantness of wine. It 'started then the aging process lasted about 12-14 months in French oak barrels and Hungarian, partly new and partly from the first step; during this period the different lots, vinified separately according to the varieties and variables wine, rise in wood, and then be assembled a few months before bottling.

Tignanello is produced exclusively from the vineyard located on a plot of 57 hectares facing south-west, of limestone and tuff, at a height between 350 and 400 meters above sea level at Tignanello estate. It 'was the first Sangiovese to be aged in barriques, the first modern red wine blended with non-traditional varieties like Cabernet, and among the first red wines made in Chianti with no white grapes. Tignanello, originally "Chianti Classico Riserva Tignanello vineyard" was vinified for the first time from a single vineyard with the year 1970, when it contained 20% Canaiolo and 5% Trebbiano and Malvasia, and was aged in small barrels oak. With the 1971 vintage it became a Tuscan table wine and was named Tignanello and with the 1975 vintage, white grapes were totally eliminated. Since 1982 the composition has remained the same as today. Tignanello is produced only in the best years; was not produced in 1972, 1973.1974, 1976, 1984, 1992 and 2002.

Tignanello 2011 has an intense ruby ​​red color with violet hues. The nose is ripe with notes of dark fruit and fresh substrate in the final; predominates the chopped plum with hints of cherry, going with progression and balance to notes of licorice and mint. On the palate, though still young, the wine has readiness and availability, is rich and harmonious. Excellent on the palate, with soft acidity and structured tannins. The aftertaste is rich, savory and characterized by a sweet finish.