The season started with a mild winter and little rain which has led to a strong advance of sprouting and all other vegetative phases. Subsequently the first months of summer were with fairly high temperatures, while in August the weather cooled down, allowing regular vegetative growth of the plants, even if you arrived at harvest slightly earlier than the average of previous years. In September and October, the days were warm and sunny with cool nights, creating a temperature that ensures a high quality of grapes, especially for the Sangiovese. Since the beginning of the vinification process it was clear that the quality of the grapes, and consequently that of the musts, were high. In addition to perfumes and intense colors, varieties of Sangiovese and Cabernet are distinguished by their strong typicality. The optimal climatic conditions that have allowed the harvest, carried out between mid-September and the first week of October, were held accurately with a careful selection of grapes.

The favorable weather conditions during the harvest made it possible to gather the grapes of the vineyard Solaia depending on the level of maturation due to sun exposure and the vigor of the plants, making it possible to have such high quality grapes. These favorable conditions have not impede the usual attention to the unsorted as to the selection of the grapes in the vineyard, so as to arrive at the winery perfect grapes, a necessary condition for obtaining wines of high quality profile. The collection was carried out by hand and, as in previous years, during winemaking has given much attention to the phases of fermentation and extraction, by performing the following operations délestage and replacement such that the varietal aromas and high content color of the grapes. For all varieties (Sangiovese, Cabernet Sauvignon and Cabernet Franc) fermentations were conducted at an average temperature of 27 ° C, no higher than 31 ° C, to preserve the most of olfactory sensations and typicality of the fruit, very present in the raw material. The musts were immediately shown the complexity and the typical varietal scents, showing elegance and color to predict a year with such great potential. After racking, made at the end of alcoholic fermentation, the wines were put into oak barrels to make the malolactic fermentation by the end of the year. During the aging period, which occurred in new French oak woods and lasted about 18 months, the different batches of wine were managed separately and constantly tasted to control and maximize their aging in wood. As always it is placed great attention to the evolution of each barrel, to monitor and ensure the elegance and character of the tannins, thanks to racking performed periodically. Finally, the wine is blended and bottled on the farm, honing for a year in the bottle before being placed on the market. Alcohol: 14.5%

Solaia is a vineyard of 10 hectares facing south-west between 350 and 400 meters above sea level on a rocky limestone soil with limestone rock, located at Tenuta Tignanello. The Marchesi Antinori produced this wine for the first time in the year 1978; the initial blend was 80% Cabernet Sauvignon and 20% Cabernet Franc, which was repeated in 1979. In subsequent years it was introduced a 20% Sangiovese and some corrections were made in the relationship between Cabernet Sauvignon and Cabernet Franc, until arrive at today. Solaia is only produced in exceptional years and was not produced in 1980, 1981, 1983.1984 and 1992.

Solaia 2007 is a wine of great complexity and strong and full-bodied structure. The nose is fruity and intense, sweet, with notes of ripe cabernet which give the wine a strong identity. In the mouth the tannins are soft and are consistent with the sweetness and harmony. The varietal notes dominant and work together for a long finish of great persistence. 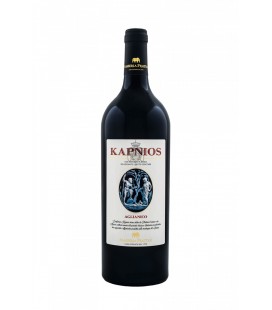 €65.00
0 Review(s)
The color is purple. The smell reminds blackberries and black currants. the taste full and balanced with melted tannins and a long finish of roasted coffee sugar, chocolate, tobacco and spices.
Tap to zoom
You need to login or create account